This version is deprecated - for version of the plugin

All of the plugin's settings can be loaded from within the configuration file or set via the in game commands.

Textual files are stored in the Texts folder:

Logs folder contains ChatLog files, if the chat logger has been enabled in settings, as well as IP Logging History if that setting is enabled for the server.

Storage folder contains plugin's internal files and these should NOT be edited manually.

All files can be edited and then reloaded into the game via the command. There is no need to restart the server to apply new permissions or add users to Moderators list. However, I would advise to simply use the in game commands to add mods and change permission levels, in order to avoid any edit errors to JSON file. Plugin will detect such errors and inform if there are any.

Motd.txt and Rules.txt files on the other hand, should be easy to to edit as they contain general string. They accept tags such as <color> <b> <i> for different text formatting as in Eco client.

It is possible to prevent specific users from executing an action, for a specified amount of time.

There are currently four preventable actions in the plugin:

will prevent user nidaren for mining for 30 minutes.

nid-AllowChopping, nid-AllowClaiming, nid-AllowMining and nid-UnMute can be used to lift any of the preventions in place before they end time.

It is possible to assign tags to players that will show up in chat and/or in tooltips.

There are two types of tags: special tags and regular tags.

Special tags are a closed group of role-based tags that consists of Admin, Moderator and Server Owner.

Special tags have own section in the config file, they can be also assigned a custom name (renamed), set to be visible in chat and/or in tooltip and assigned a dedicated colour.

Please note that renaming a special tag (assigning it a custom name), will only have visual effect i.e. in chat and tooltips, but will not rename the permission groups this tag reflects.

Should you rename the special tag (using custom name) in order to configure it, you still need to use its proper (old) name. For example: If you renamed tag Admin to SomeoneSpecial, you need to still use Admin in all the configuration commands. It is due to the fact that the tag is still named Admin, it just has a property Custom Name assigned to it by you and uses it for the display.

If you need a new tag, simply add the new title in the Registrar and then configure your tag via command. Tag is created automatically for each new title, but starts as invisible.

Once created Admins (or any allowed permission group) can then decide if the tag should be visible anywhere - all tags start as hidden both in chat and tooltips. When trying to create new titles, some names are forbidden from usage - for example any name that reflects the existing role, or contains its name in it - i.e. Admin, Mod, Owner etc.

Colours can be defined either by name (NidToolbox accepts 16 html colours <- click for examples) or if you don't like any of the provided colour you can define your own using its HEX code. It is easy to find desired code for example here <- click.

Tags can also be configured in their own config file ChatTags.json 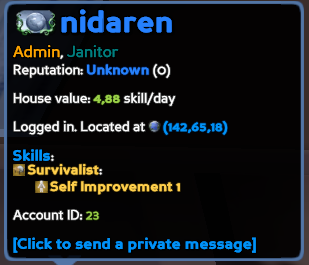 If Minting Rights are set to required on the server, only players that posses minting rights are able to craft either new currency or mint an existing one their previously created.

Minting Rights can be enforced either by enabling their requirement via the command nid-MintingRightsRequire or by setting RequireMintingRights option in Settings.json General section to true.

Rights can be revoked and granted at any time by admins, there is also a way to track who has granted to rights and when.

Minting privileges are reflected in the Status screen of any Mint.

When enabled this simple module allows players to marry one another.

For marriage proposal to be successful the addressee of the request must be online and also must agree to the request. Once accepted, both players will be marked as married to one another in the player's tooltip. It is also possible to divorce previously married partner by issuing nid-Divorce command.

At any moment players can view existing server marriages by issuing command nid-MarriagesList. This list tracks partners engaged in a marital union as well as the date when the union between them was created.

Marriages can be enabled either via the command nid-MarriagesAllow or in the Settings.json file.

This module enables sending messages that are based on specific timer. Module can store multiple messages which can all have their own timers. Messages can be added either via the file editing (Messages.json), or by using the in game commands (see info below for details).

They accept formatting like bold, underline, different text size etc. When running the plugin for the first time, timer module, as most of the plugin functionalities, start as disabled and need to be enabled by the admin. Please note that all timers are shown and should be given in minutes!

Configuration of each message and the module resides in file Messages.json, below is the example extract:

When enabled, allows sending Scheduled Messages .This is type of a server message that displays at exact hour i.e. 16:52. This should be useful for any of you that require messages shown at specific and exact time.

Messages can be added either via the file editing (ScheduledMessages.json), or by using the in game commands (see info below for details).

They accept formatting like bold, underline, different text size etc. When running the plugin for the first time, scheduled messages module, as most of the plugin functionalities, start as disabled and need to be enabled by the admin.

Configuration of each message and the module resides in file ScheduledMessages.json, below is the example extract:

Important: There is no option to disable the Rules Module in the config file, as it can be achived simply by setting the command /nid-Rules to Disabled.

Important: There is no option to disable the Server Changelog Module in the config file, as it can be achieved simply by setting the command /nid-ServerLog to Disabled.

This simple module allows server admins to list recent changes they did to their Server on date-by-date basis. Changes can be then displayed by the players in the info-type window in game. 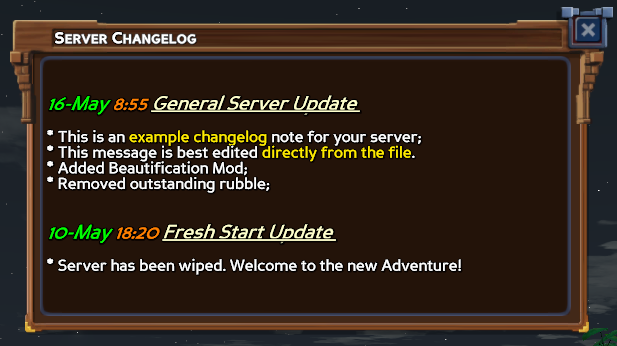 This module allows players to designate a specific location as their home. When set, players are able to teleport back to this location via the command.

Module is also equipped with a timer that can enforce a cooldown on the ability to ensure it is not abused by the server members.

Additionally, cost of both calories and money can be set. When enabled, each time users teleport home they will be charged with specified amounts. Monetary cost requires that global currency is set on server by the world leader. Global currency can be set in Treasury.

IMPORTANT: If you edit any of the configuation files by hand, make sure you use /nid-reload to load your changed values into the server! No restart needed.

This module is disabled by default and may be activated by going to:

When active this module will trigger at each user logon event, registering data about IP, time of connection, steam, slg and internal IDs as well as user name;

It provides a possibility for checks and tracking of the user activity on Server.

Log files are stored in Mods/NidToolbox/Logs/IPsHistory . Each file is named according to the following format: <characterName>_<InternalCharcterID>.log example name nidaren_SrvID-1.log. This makes them easy to locate when trying to find connection information on specific player.

Dates and times in logs are stored in accordance with Computer's regional settings.

All currencies names are NOT case sensitive and can be typed partially, for example: Mossy for MossyCoin or nidaren for (Nidaren's Credits). Plugin will find and match the currency. If more currencies are named the same, you will be asked to be more specific.

(extract - for full list see in game or on below screenshot)

To view the available commands in the plugin type /nid-help. It will list all the commands with the corresponding permission level requirements.

All the plugin's assignable commands start with nid- prefix.

IMPORTANT: Names are case sensitive in the game client. If you are getting user not found error, do make sure you have typed the name properly.

Commands below, similarly to the ones above can all be assigned specific permission levels. Admins will have access to all commands.

Feel free to leave me feedback, suggestions or report bugs in discussion here, I am available at the official Eco Discord channel, if you would like to ask something just tag me or message me directly - at nid#3035

All Files
This site uses cookies. By continuing to browse this site, you are agreeing to our use of cookies. More Details Close